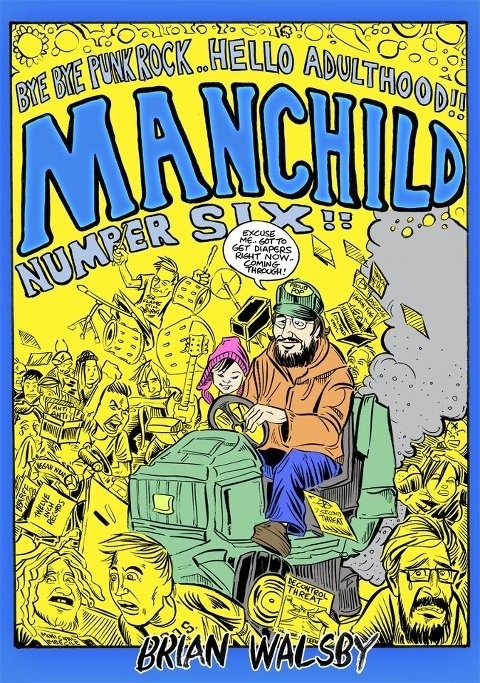 Description: After finally being suckered into fatherhood with the birth of his daughter Willow, Brian Walsby finally says, “goodbye punk rock, hello adu...lthood” with the release of MANCHILD 6. Joining the ride is new publisher Will Butler of To Live a Lie Records. Will somehow believed in Brian enough to spend his own money on someone who obviously is out of touch, has betrayed the scene (any scene, take your pick) and has more or less moved on. Or has he?

Despite the nonstop demands of diapers, real life responsibilities and taking the six year old Noble to school most of the time Brian has still somehow found precious time in coming up with new work. Filling out MANCHILD 6 are exclusive interviews straight from Brian’s blog (INTROVERTED LOUDMOUTH) from the last couple of years with lengthy interviews with Richmond’s TANNON PENLAND (LOINCLOTH), Raleigh’s own incredible songwriter KENNY ROBY, The split personality of SCOTT RADINSKY (PULLEY, TEN FOOT POLE, SCARED STRAIGHT) , guitarist for the DESCENDENTS and ALL STEPHEN EGERTON and a lengthy tour diary on the road with MELVINS right before Willow was born. Lots of good reading.

So if you are at all interested in punk rock, fatherhood, MELVINS, potshots at people who deserve it, Mad magazine type satire and all of the other things that Brian Walsby is known for, MANCHILD 6 is a must have and a fine addition to a growing collection of hard work.