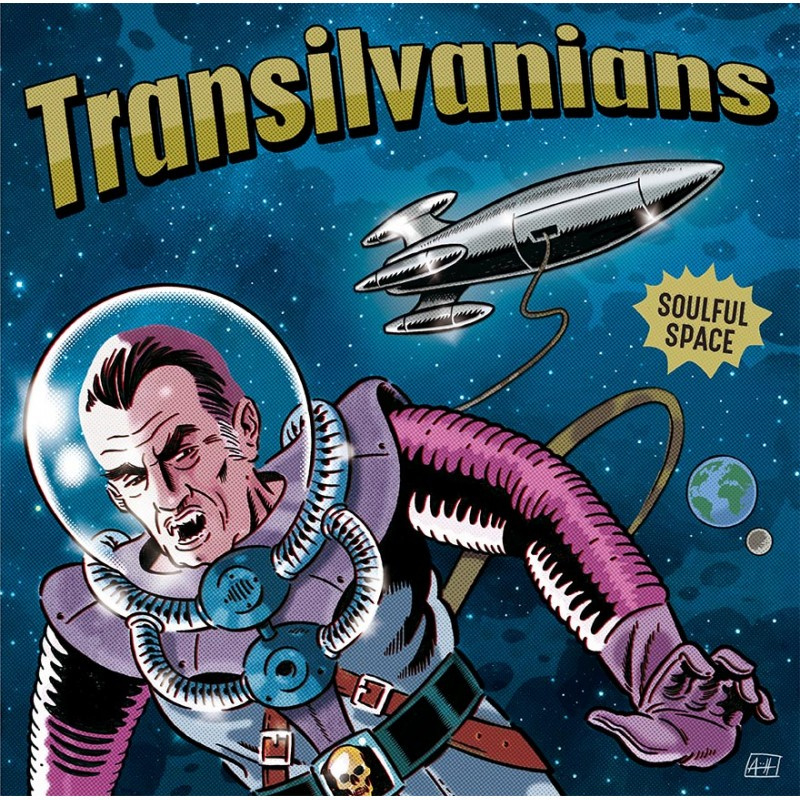 Description:
Transilvanians return with a brand new LP (their 4th) recorded at The Dub Yard in Vigo by Javi Vicalo and produced by Kino L-Cobra. The album features eleven new songs, three adapted and eigth own compositions.
Side A starts with 'Curse Of Pharaoh' instrumental reggae with psychedelic trail synths. This song is the continuation of 'Into the Pyramid' from their previous album. It is followed by the first of the covers, '¿Como Fue?', a classic bolero composed by Eduardo Brito and popularized by Benny Moré, inna Rocksteady style with a masterful result. Then 'Blue Beat Train', the title leaves no room for doubt, when it passes by your station, don’t ever miss this train. 'Jack The Ripper' is the typical theme where Transilvanians move very comfortably, reggae mixed with classics from literature and horror movies. After that comes the first collaboration of the album with the Vigo singjay High Paw who puts her words and voice to 'The Power Of Rocksteady' pure soul from the Caribbean with one of the best current female voices on the scene. And to bid farewell to the A-side of the album, the band performs with a brilliant melancholic instrumental Ska of a very classic cut, their little tribute to Gonzalo Villar, one of the essential figures and one of the greatest cultural agitators of Vigo’s music scene.

Side B begins with 'Afronauts', a martian funky reggae tribute to Edwuard Makuka and his Afronauts from Zambia who in 1964 decided to embark on their particular space race to send 12 Afronauts and 10 cats with the clear objective of competing with the two greats superpowers to conquer the Moon. Then another cover of a great classic by the Godfather of Ska, Mr. Laurel Aitken; 'Boogie in my Bones'. The next tune is '1968'. For many, 1967 and the explosion of Rocksteady or 1969 with Early Reggae, are the best years in Jamaican music, but Transilvanians claims 1968, a year of transition where these two styles merged and when a multitude of great hits were billed. In the latest version of the album Transilvanians turns a punk-rock song around again, this time it’s the turn of 'Is Anybody There?' by Cock Sparrer, and with another luxury collaboration on vocals by the band’s old mate, Rubén López, who takes this great street anthem to another dimension. And to dismiss the album, they dedicate 'The Black Mambas', an instrumental reggae with African flavor, to the armed group of the same name formed exclusively of women that fights in South Africa against poaching, defending animals that are in danger of extinction. Honor and glory for the Black Mambas!
The album’s artwork, as usual, was carried out by the illustrator Roberto Argüelles.
Format & package: LP
Year of release: 2020
Tracks:
A1. Curse Of Pharaoh
A2. ¿Cómo Fue? (Trad.)
A3. Blue Beat Train
A4. Jack The Ripper
A5. The Power Of Rocksteady
A6. SkancaraJazz
B1. Afronauts
B2. Boogie In My Bones (Laurel Aitken)
B3. 1968
B4. Is Anybody There? (Cock SParrer)
B5. The Black Mambas