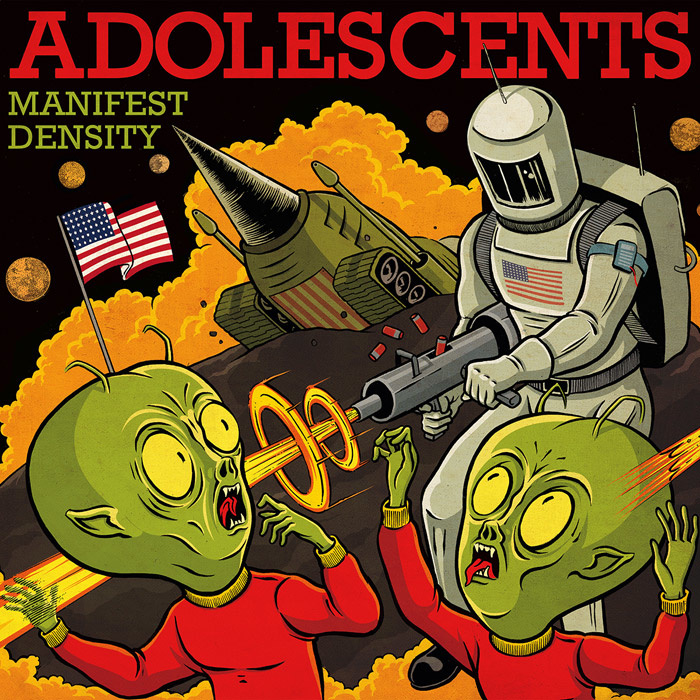 Description:
ADOLESCENTS are one of America’s most popular punk bands. They were formed by original AGENT ORANGE bassist Steve Soto and singer Tony Cadena (Reflex) in 1979 in Fullerton, California. Along the way they recruited the Agnew brothers from SOCIAL DISTORTION and in 1981 released their self titled debut album “Adolescents“ which would become one of the most influential Southern California punk rock albums of all time. Along with BAD BRAINS, BLACK FLAG and MINOR THREAT they are one of the leading bands of the 1980s hardcore / skate punk scene. Over all those years the band has influenced many of today‘s later punk groups, including BAD RELIGION, NOFX, FACE TO FACE, GOOD RIDDANCE, THE OFFSPRING, PENNYWISE, RISE AGAINST, SLAYER and FU MANCHU.

The first line up disbanded in late 81 but the band returned in 1986 with a new drummer and a new record “Brats in Batallions”. Reflex left in 1988 and the band released one more record “Balboa Funzone” before disbanding in 1989. The band once again reunited in 2001 for a 20th anniversary tour and have continued performing ever since. With a few line up changes Soto and Reflex have taken the ADOLESCENTS across the US, Europe, Japan and South America and they released OC Confidential, their first studio album in 17 years in 2005.

Finally since 2011 the band has been more productive than ever. After their successful album in 2011 „The Fastest Kid Alive“, their great EP „American Dogs in Europe“ in 2012 and their records „Presumed Insolent“ (2013) and „La Vendetta“ (2014), the band decided to take a small break. But now they‘re back and ready to release their 5th studio album!

And the new album is a blast! Produced by Paul Miner (DEATH BY STEREO, H2O, ATREYU), „Manifest Density“ has a powerful sound without losing the typical ADOLESCENTS‘ charm. Songs such as „Nightcrawler“, „Catfish“ and „Ratcather“ are great and catchy Cali-Punk anthems with intellectually sharp and critical lyrics.
Format & package: LP + download code
Year of release: 2016
Tracks:
A1 Escape From Planet Fuck
A2 Hey Captain Midnight
A3 Unhappy Hour
A4 Silver And Black
A5 Nightcrawler
A6 Jacob's Ladder
A7 American Dogs In Europe
B1 Spring Break At Scar Beach
B2 Catfish
B3 Lost On Hwy 39
B4 Bubblegum Manifesto
B5 Rat Catcher
B6 Vs