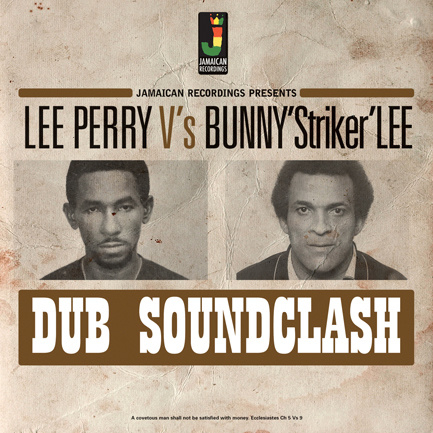 Description:
What two great producers other than Lee Perry and Bunny Lee would be best suited for a Dub Soundclash. Both producers were integral at the birth of dub music and would share many rhythms and sessions, there musical paths would cross all through their careers .It was in fact Bunny Lee’s rhythm that provided the back drop to Lee Perry’s ‘Shocks of Mighty’ cut. Jobs were passed from one to the other, Bunny Lee taking over Lee Perry’s position at WIRL records. Yes two producers whose paths always seemed to cross as it does with this release.
We have selected some of Lee Perry’s rhythms, side one of this set, against some Bunny Lee rhythms on side two.You can hear the distinctive sound of Lee Perry’s Black Ark studio with his echo-plex giving his trademark whirling sound against Bunny Lee’s rhythms cut at many different studio’s. He was as they say the ghost of the studio’s, using all the downtimes and night sessions to get his rhythms together. Unlike Lee Perry Bunny did not have his own studio till much later, when he took over Joe Gibbs premises. But his rhythms found a home at the great King Tubby’s studio, where they were worked over
with great success. The winner of this Soundclash ?, we will leave that decision up to the listener. But in this Dub session there is no loser
Format & package: LP
Record label: Jamaican Recordings
Year of release: 2018 (compilation)
Tracks:
A1 Lee Perry - War Inna Dub
A2 Lee Perry - Vampire Dub
A3 Lee Perry - Curly Dub
A4 Lee Perry - Words Dub
A5 Lee Perry - Judgement Dub
A6 Lee Perry - Praising Dub Dub
B1 Bunny Lee - Fixing Dub
B2 Bunny Lee - Every Trick Dubwise
B3 Bunny Lee - Promoting Dub
B4 Bunny Lee - A Heavenly Dub
B5 Bunny Lee - M16 Dub Style
B6 Bunny Lee - A Real Rocking Dub
B7 Bunny Lee - A Drifting Dub