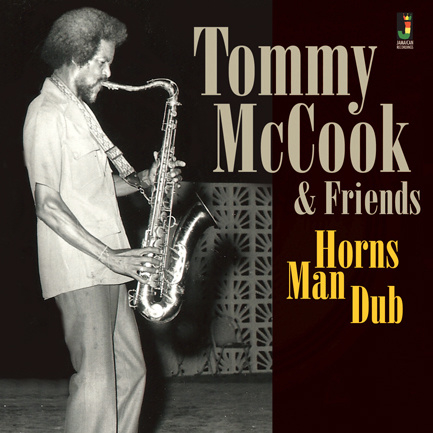 Description:
Tommy McCook was not only a founding member of the legendary Jamaican Ska group The Skatalites, but also a brilliant musical arranger. His informed understanding of Jazz, R& B and in fact most music styles would always add another layer to any song put his way. This made him the go to guy for most of the Jamaican producers, who would use his arrangement skills to pepper up there latest tunes.

A set of musicians under his guidance that consisted of Lynn Tait and Ernest Ranglin (Guitar), Neville Hinds and Winston Wright (Organ), Gladstone ‘Gladdy’ Anderson (Piano), Hugh Malcolm and Arkland ‘Drumbago’ Parks (Drums), Clifton ‘Jackie’ Jackson (Bass) and Tommy and Hermon Marquis (Saxophone). The more laid back sounds from 1966 – 1968 would be given the name Rocksteady of which again McCook was at the forefront.The 1970’s saw the sound of reggae mutate to a heavier feel lead by Bass and Drums with the or­­­gan pushed to the forefront. The top producers like Bunny Lee would use the musicianship of Tommy McCook and his arrangement skills to enhance this new sound.
Format & package: LP
Record label: Jamaican Recordings
Year of release: 2020 (compilation)
Tracks:
A1 Murderous Horns Dub
A2 Wreaking Horns Dub
A3 Natty Congo Dub
A4 Tribulation Horn Dub
A5 Everybody Needs Dub
A6 Ambitious Dub
B1 Finding Dub
B2 Catching Horns Dub
B3 Springtime In Dub
B4 Sacrificial Dub
B5 Wicked Flute Dub
B6 A Smiling Dub