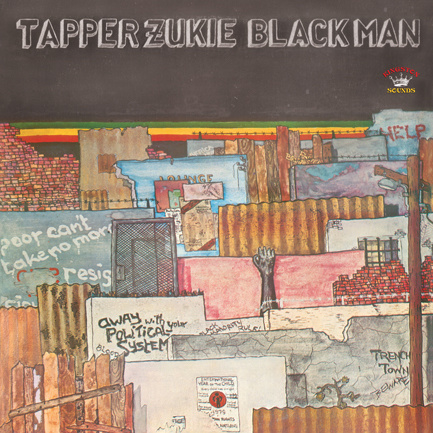 Description:
Tapper Zukie’s ‘Black Man’ album originally came out in 1978 as a Jamaican only release on Tapper’s ‘Stars’ imprint. Long deleted it has become a classic in Mr Zukie’s vast cannon of musical biscuits and is well overdue this worldwide release for the first time.
To release his own material in Jamaica Tapper stated up his own label called ‘Stars’. ­It’s this label that saw the initial release of this album ‘Black Man’. A great collection of Tapper tunes such as his biblical cut ‘My God is Real’, ‘Revolution’ and the title track of this collection ‘Black Man’ and some work-overs of some of his fellow Jamaican artists like ‘Poor Man Problem’ a work over of Johnny Clarke’s, ‘Blood Dunza’ and also Mr Clarke’s ‘Leggo Violence’. ‘Yaga Yaga’ re-working Horace Andy’s and Tapper’s big hit ‘Natty Dread ah We She Want’. ‘Gather Them’ a rewoking of ‘Knowledge’s tune of the same name with help from the bands Jah Wisdom and Delroy Folding.
Format & package: LP
Record label: Kingston Sounds
Year of release: 2019 (reissued from 1978)
Tracks:
A1 My God Is Real
A2 Revolution
A3 Poor Man Trouble
A4 Money Man Skank
A5 Yagga Yagga
B1 The Boom
B2 Leggo Violence
B3 Gather Them
B4 Black Man