Larose Jackson ‎- How Did I Get Here? 7" 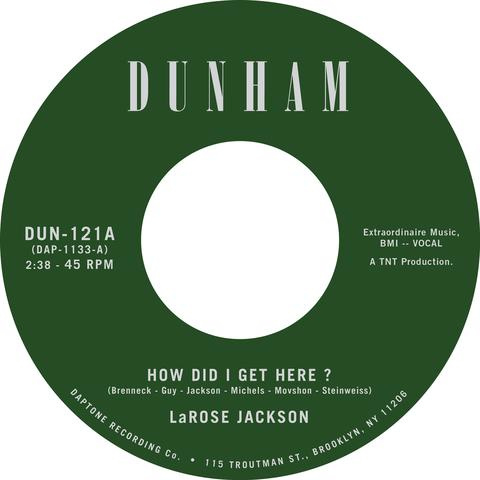 Description:
LaRose Jackson, who you may remember from "Luv Jones" - the 2014 party -cer tified smash duet wit h the incomparable Charles Bradley - steps into the spotlight with her funky solo debut, "How Did I Get Here ". Born and raised in Coney Island, LaRose's rich timbre and asser tive vocal deliver y caught the attention of producer Tommy "TNT" Brenneck one night when he was in attendance at Charles Bradley's legendary "Black Velvet" show at Club Essence - where Jackson was also a regular performer. The two hit it of f and began collaborating on several sides, the fruit of which we humbly of fer up here. LaRose's tough-as-nails deliver y coupled with t he infallible groove and sure-shot horn arrangement courtesy of the Menahan Street Band distills the track down to Soul in its purest form, without sacr if icing any of the rawness one comes to expect from a TNT production. Expect much more on the horizon from LaRose and Co.. This is just the tip of the iceberg!Non-album track + Version. US import.
Format & package: 7"
Record label: Dunham / Daptone Records
Year of release: 2021
Tracks:
A Larose Jackson - How Did I Get Here? (Vocal)
B Menahan Street Band - How Did I Get Here ? (Instrumental)