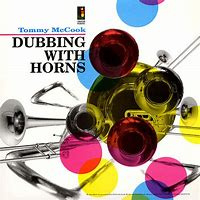 Description:
Tommy McCook founding member of the legendary group The Skatalites and the master session musician has left his mark over all the different styles of Jamaican
music. The big band sound that lead to the beginning of Ska, to the forefront of Rocksteady and throughout the various stages that Reggae music would mutate itself into. All carrying Tommy McCook's distinctive stamp that always added a flavour to the songs style.
The 1970's sound that reggae mutated to would be heavier in feel lead by Bass and Drums with the organ pushed to the forefront.But many of the up and coming Producers like Bunny Lee (The Aggrovators Band), Joe Gibbs (The Professionals Band) and Studio's like the Hookim brothers Channel 1 set up had the foresight to keep using the musicianship of Tommy McCook and his arrangement skills to enhance this new sound.
Its from this rich period that we have compiled a selection of some of Mr McCook's greatest cuts that featured him blowing over some great tracks, that stripped of their vocals sees Tommy replace that with some fantastic lead lines. We hope you agree that Tommy's Dubbing with Horns makes a marvellous almost Jazz styled album rich in texture, but in fine Jamaican style.
Format & package: LP
Record label: Jamaican Recordings
Year of release: 2021 (compilation, repress from 2011)
Tracks:
A1 Tommy's Hop
A2 Take This Fruit
A3 Jumper's Dub
A4 Dub Creation
A5 Merry Up
A6 Aggrovating Horns
A7 Dub Train
B1 Classical Rockers
B2 Waltzing Rockers
B3 Chant Down Babylon With Horns
B4 Blowing Up A Storm Dub
B5 Dub Fever
B6 Dub For Ethiopia
B7 Wailing Dub