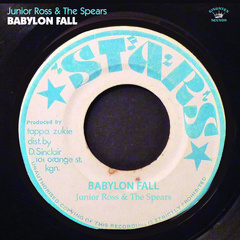 Junior Ross and The Spears are another great Jamaican roots group that have been nurtured under the guidance of fellow Jamaican, producer and singer Tapper Zukie. Who not only gave the singer and his band their name but recorded, produced and released their records on his own ‘Stars’ imprint label.
This album you have here got its initial release in 1992. We have added to it the various dub versions that were b-sides to the singles and extended recordings again produced by Tapper Zukie. So you have the Junior Ross and the Spears classic album and its related musical accompaniments all in one place and sounding better that ever
Artwork inspired by original JA 70s pressing.
Format & package: LP
Record label: Kingston Sounds
Year of release: 2018 (reissued from mid 70s)
Tracks: