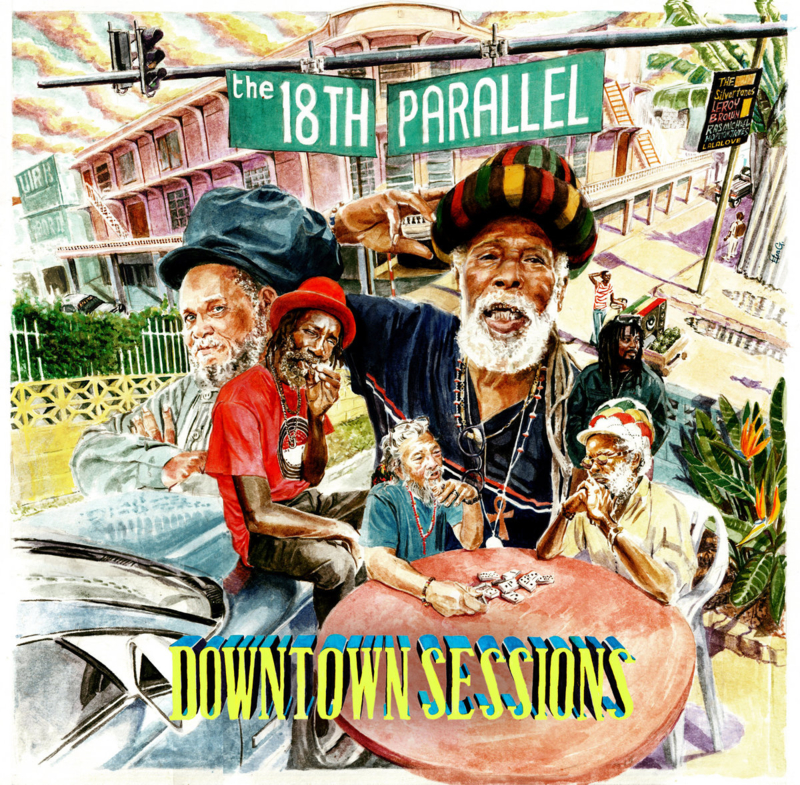 Description:
In September 2021, The 18th Parallel unveiled their first collaborative LP with Lone Ark, 'Showcase Vol. 1', which was unanimously acclaimed by international critics. After a series of singles in collaboration with key artists from the golden age of Jamaican reggae such as Lee "Scratch" Perry, Linval Thompson, Dennis Walks, Burro Banton and Mike Brooks, the Swiss musician-producer combo is back with a new project on November 18th, 2022, Downtown Sessions, to delight the ears of old-school roots music fans.
'Downtown Sessions' is the result of ten years of studio sessions between Geneva and downtown Kingston with legendary drummer and Rockers movie star Leroy "Horsemouth" Wallace (Studio One, Black Disciples, Soul Syndicate, Pierpoljak, Groundation,...). The 18th Parallel hits hard by inviting some of the biggest names in Jamaican reggae on this new record: Cornell Campbell, Max Romeo, Ras Michael, Fred Locks, Big Youth, I Kong, Leroy Brown, The Silvertones and Hopeton James, not forgetting a Swiss guest, Lala Love.
A real anthology of roots reggae legends who blossom on original and varied riddims that pay tribute to different eras of Jamaican roots music production, from the raw sound of Randy's to the Studio One discomix drenched in reverb of the late 1970s, via the polished arrangements typical of Geoffrey Chung's productions at Dynamics studio or the sound of Ras Michael's nyahbinghi drums! An exceptional record that combines tradition and modernity by bringing together the original voices of roots reggae with the refreshing vision of the young Swiss collective The 18th Parallel, all under the leadership of the legendary Horsemouth and producer Mathias Liengme. A future must-have for any music lover's collection!
Format & package: LP
Record label: Fruits Records
Year of release: 2022
Tracks:A1. Cornell Campbell - Lovely Feeling
A2. I Kong & Max Romeo - Just Like The Rainbow
A3. Fred Locks - The System Is A Fraud
A4. The Silvertones - Only Me
A5. Leroy Brown - Times Tough
B1. Big Youth - Man With A Mission
B2. Ras Michael - Ride On
B3. Hopeton James - It's Just A Wonder
B4. Lala Love - River