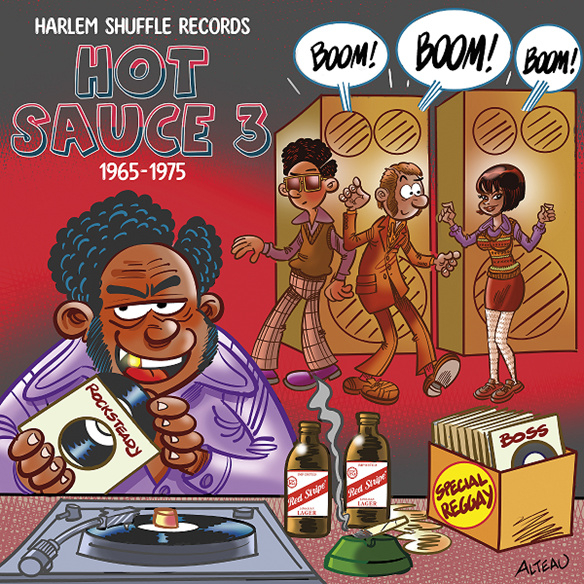 Description:
Here is the much anticipated volume 3 of the Hot Sauce compilation series dedicated to the Trojan related UK labels between 1965 and 1975. Hot Sauce volume 3 features outstanding original rocksteady, boss reggae and early reggae (reggay) tracks including rare songs, overlooked gems, hidden treasures and a couple of hits.
The record labels showcased on this third volume are Amalgamated, Duke, Gayfeet, Grape, Harry J, Rio, Randy’s, Treasure Isle, Upsetter and Trojan. The tracks here have been selected according to their musical interest firstly, their rarity, and their complementarity. these tracks are all outstanding tracks, “killer tracks”, there is no “filler” whatsoever. Particular attention has been paid to the way the songs are sequenced (or “mixed”) so that the album builds up nicely and gradually, generally starting with the rocksteady songs on the A side and the 70s songs on the B side.
Hot Sauce is a musical journey across early Jamaican reggae - highlighting its diverse musical genres and outstanding artists - as it was once published by the UK record labels during this golden decade. Since the early 70s Tighten Up series, no compilations have really explored these labels in depth on vinyl.
Format & package: LP, 180 grams vinyl
Record label: Harlem Shuffle
Year of release: 18 november 2022
Tracks:
A1 J.J. All Stars - Soup (Version)
A2 Carl Dawkins - Hard Time
A3 Naomi Phillips & The Gaytones - You're Not My Kind
A4 Toots & The Upsetters - Do You Like It
A5 Upsetter Pilgrims - A Testimony
A6 Owen Gray - Reggae Dance
A7 The Cables - Feel All Right
B1 Randy's All Stars - Time Out
B2 The Inspirations - La La
B3 The Love Generation ‎– Warricka Hill
B4 Zap Pow - Lottery Spin
B5 Carl Bryan – Red Ash
B6 Tommy McCook & The Supersonics - Arabian Dub
B7 Tommy McCook & The Supersonics - Ride De Dub