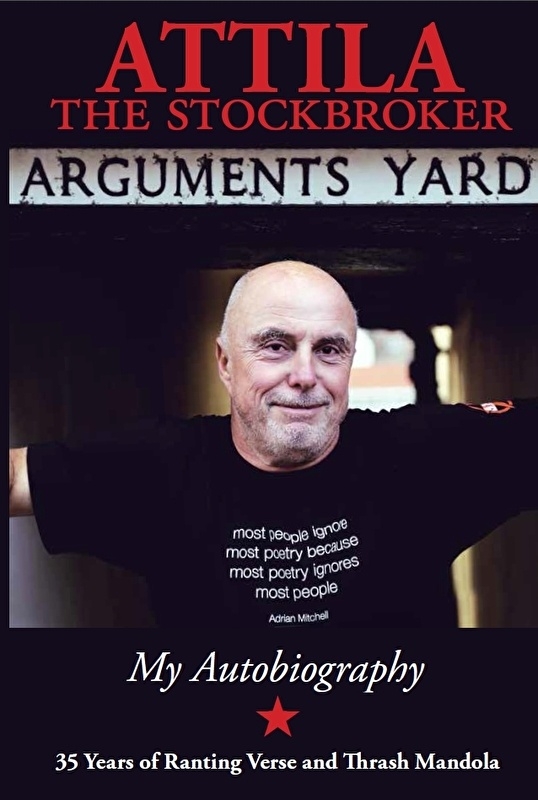 Launched into public consciousness by John Peel in the early 1980s, poet, musician, journalist and political activist Attila the Stockbroker has since spent thirty five years touring the world as a self-sustaining, one man DIY cottage industry. Having performed over three thousand gigs in twenty four countries, releasing thirty records and seven books of poetry along the way, he pauses here to relate his life story, a tale of ranting verse, punk rock and his relationship with the ever changing, increasingly corporate minded politics of the last five decades.

An autobiography like no other, ‘Arguments Yard’ bounces effortlessly from frontline tales of touring East Germany, the first ever punk performance in Stalinist Albania, being thrown out of one of his own gigs and the ongoing fight – often literally – with the fascist thuggery which blighted the punk rock scene to more homely anecdotes concerning his coastal upbringing and love of his home in West Sussex, his involvement with Brighton and Hove Albion FC and his journey into a career which has lasted far longer than the ranting verse fad which spawned it.

Full of humour and intellect, and peppered with encounters with notable figures, ‘Arguments Yard’ demonstrates a depth rarely found in the everyday performer’s autobiography, and relates an important social history, being a left wing activist’s eyewitness journey through the great political battles and movements of recent times. Rock Against Racism, the Anti-Nazi League, the miners’ strikes, the Wapping dispute, Red Wedge, the Poll Tax and campaigns against two Gulf Wars are all analysed from a ring side perspective before the author packs his bags and takes us on another tour of Australia, Canada, New Zealand, the USA or Europe.

Now a long established Glastonbury regular, a legend of his much beloved football club and the organiser of his own hugely popular beer and music festival, Glastonwick, Attila The Stockbroker remains as focussed and active as ever and continues to perform around a hundred gigs a year to diverse audiences across the English speaking world. His message is a simple one: you don’t need to be ‘a celebrity’ to lead a life earning your living doing what you love to do. You just need a way with words, the self-confidence and organizational ability of Napoleon and skin thicker than the armour of a Chieftain tank.