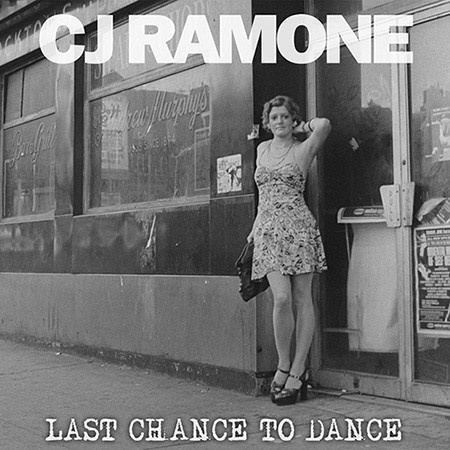 Description:
After the Ramones disbanded in 1996, CJ RAMONE continued making music, honing his singing and songwritingskills in Los Gusanos and Bad Chopper before releasing Reconquista in 2012, his first official album as CJ RAMONE. Invigorated by the reception of the album and live shows around the world from the Ramones faithful, CJ RAMONE is back in 2014 with Last Chance to Dance, a new album of even stronger material and a stellar backing band of SteveSoto (Adolescents), Dan Root (Adolescents), and David Hidalgo, Jr. (Social Distortion).
With a sound and style true to the Ramones, CJ RAMONE has again added to the legendary Ramones canon with a positively infectious punk rockrecord. While Fat Wreck Chords has a long history of bands influenced BY the Ramones (Screeching Weasel, Chixdiggit!,Teenage Bottlerocket, Masked Intruder), releasing an album FROM an actual Ramone is a first and a true honor. Sometimes you just "need a Ramones fix", the expression goes, and CJ RAMONEs Last Chance to Dance satisfies that craving in spades.
Format & package: LP
Year of release: 2014
Tracks:
A1 Understand Me?
A2 Won't Stop Swinging
A3 One More Chance
A4 Carry Me Away
A5 'Til The End
A6 Long Way To Go
B1 Mr. Kalashnikov
B2 Pitstop
B3 Grunt
B4 You Own Me
B5 Last Chance To Dance
B6 Clusterfuck