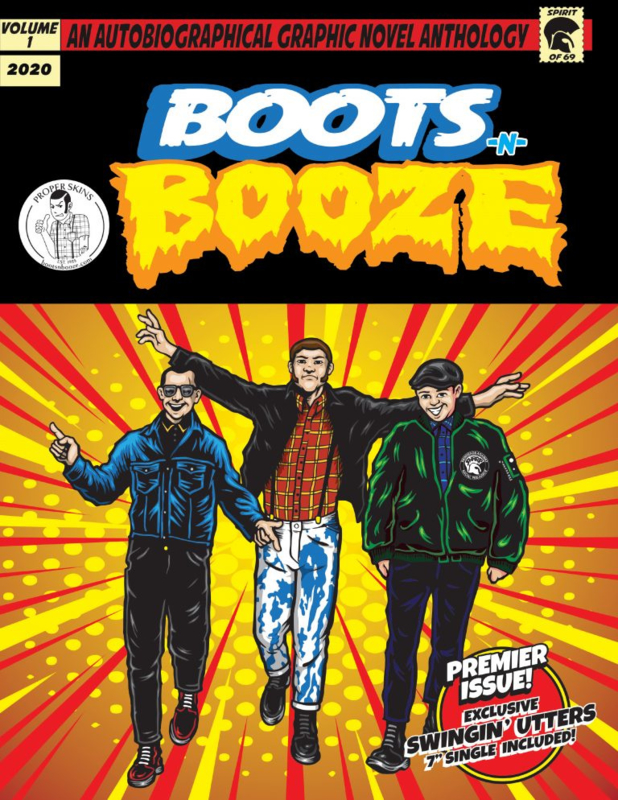 Description:
This is the first edition of an autobiographical graphic novel set in a small California beach town during the 80’s. Follow the exciting and hilarious adventures of a merry band of teenage ne'er-do-wells as they navigate their way through life. Rejecting society’s norms, they instead chose to emulate the 1960’s British youth cult Skinhead, from its particular style of dress to its fanatical love of Ska, Reggae, and Soul.

Sharing the town with Surfers, Valleys, Punks, Mods, as well as their hated rivals; the neo-nazi Boneheads, soon leads to conflict, but their fun loving good nature always shines through!

The comic comes with an exclusive 7” featuring early SWINGIN' UTTERS (known then as JOHNNY PEEBUCKS & THE SWINGIN UTTERS) recorded live at one of the parties documented in this comic!

BOOTS N BOOZE magazine is the longest running skin-zine, getting its start back in 1986! Based in Santa Cruz, California, BOOTS N BOOZE covered the entire traditional skinhead movement, including music reviews, booze reviews, interviews with bands and musicians spanning the entire scope of the culture.