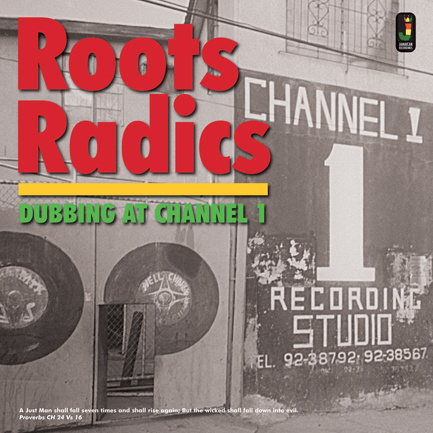 Description:
The Roots Radics were based around the nucleus of Errol ’Flabba’ Holt (bass), Lincoln Valentine ‘Style’ Scott (drums) and Eric ‘Bingi Bunny’ Lamont (guitar). Holt and Bingi Bunny had previously been involved in the Morwells label set up and had cut some popular tunes such as ‘Swine and Dine’, ’They Hold Us Down’ and the great ‘Kingston Twelve Tuffy’. Before this Bunny had played foe one of the other great reggae session bands the Channel One based Revolutionaires. It was the demise of this legendary band due to Sly and Robbie’s commitments to their own Taxi label that lead to the formation of the Roots Radics.
Format & package: LP
Record label: Jamaican Recordings
Year of release: 2017 (compilation)
Tracks:
A1 A Prospering Dub
A2 Time And Place To Dub
A3 Good Looking Dub
A4 Scandal Dub
A5 Postman Dub
A6 That Girl Dub
B1 Bubbling Dub
B2 Pon The Dub
B3 Buying Out The Dub
B4 Ram Jam Dub
B5 Next To Dub
B6 Talk About Dub