The Aggrovators ‎- Aggrovating The Rhythm At Channel One LP 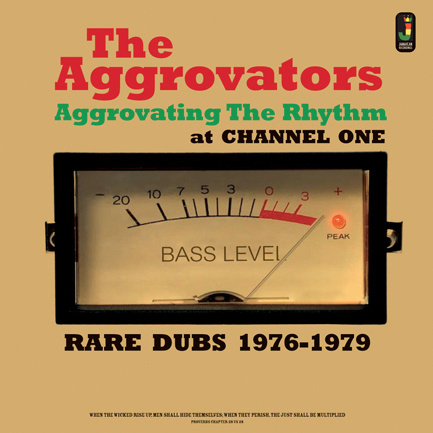 Description:
Rare Dubs 1976-1979.
The Aggrovators were a group of reggae musicians that usually featured Carlton ‘Santa’ Davis on drums playing alongside Robbie Shakespeare on bass, with other musicians added like Earl’Chinna’Smith on guitar and Tommy McCook and Vin Gordon and Lennox Brown added for horn arrangements. Keyboards and organ duties normally fell to musicians Ansel Collins and Bernard’Touter’Harvey. The band was named after singer Eddie Grant had repeated the phrase to producer Bunny Lee on one of his many trips to England, that such and such artist was giving him ‘Aggro’.
This was a term used in England in the early to mid 1970’s by the Skinhead followers of reggae music. A term shortened from the word ‘Aggrovation’, meaning trouble, fighting or making the situation worse. Bunny Lee was so taken with this term that on returning to Jamaica, not only did he name his group of musicians the ‘Aggrovators’ but he also named his record shop situated at 101 Orange Street `Agro Records’.
Format & package: LP
Record label: Jamaican Recordings
Year of release: 2017 (compilation)
Tracks:
A1 Do You Dub Me
A2 A Graceful Dub
A3 An Inspirational Dub
A4 Give Me A Dub
A5 Gonna Make You Dub Me
A6 Maddening Dub
B1 Rocking Dub
B2 Words of Wisdom Dub
B3 A Wonder Dub
B4 Ambitious Dub
B5 A Dub Groove
B6 Sunshine Dub