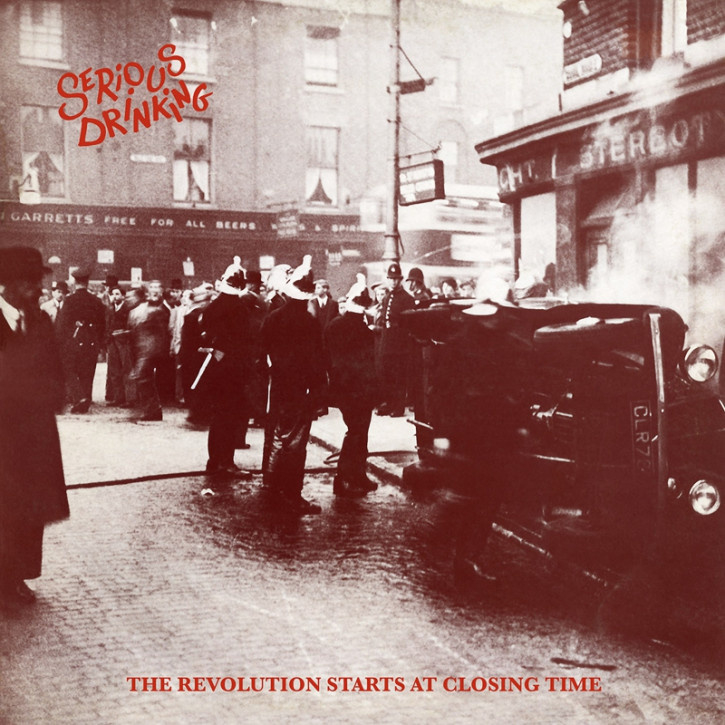 Description:
Serious Drinking were an English humorous punk rock band from Norwich, England, whose lyrical themes often covered football and drinking. The band formed in February 1981, taking their name from a Sounds headline to an interview with The Cockney Rejects, with most members having met at the University of East Anglia. Band members were Martin Ling (vocals), Eugene Rodgers (vocals), Andy Hearnshaw (guitar, formerly of The Farmer's Boys), Jem Moore (bass), Pete Saunders (keyboards) also known from Dexys Midnight Runners and Lance Dunlop (drums). Their debut EP, Love On The Terraces (produced by Madness's Mark Bedford reached number 9 on the UK Indie Chart in 1982, with follow-up "Hangover" reaching number 4 the following year.Debut album The Revolution Starts at Closing Time also reached number 4, and was followed up in 1984 by a second album, They May Be Drinkers Robin, But They're Still Human Beings. After another single, "Country Girl Became Drugs and Sex Punk", Moore and Dunlop left the band. The new line-up continued with sporadic gigs.
Format & package: LP + free beer coaster
Record label: Mad Butcher
Year of release: 2021 (reissued from 1983)
Tracks:
A1 Am I Coming Over To Yours?
A2 Spirit Of '66
A3 Love On The Terraces (Mk. III)
A4 Countdown To Bilko
A5 Really Good Bloke
A6 I'm On Drugs
A7 T.V. Song
A8 12XU / Bobby Moore Was Innocent
B1 The Revolution Starts At Closing Time
B2 Baby I'm Dying A Death
B3 Time Is Tight
B4 World Service
B5 Winter's Over
B6 The Weird Son Of Angry Bastard
B7 Are You Coming Over To Mine?