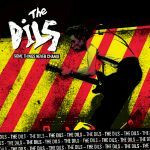 Description:
One of the very first bands of the first wave of American punk rock, along with the Screamers, the Avengers, the Weirdos... This record compiles all their studio songs, the first demo as well as their three singles! The b-side features extra live recordings: 7 songs that never got recorded in the studio.
Featuring the California all-time classic punk rock record single 'I Hate The Rich' and includes liner notes from the band's very own Chip Kinman: "We wrote songs. Wrote them on guitars and played them really, really loud..."
Format & package: LP
Record label: Restless Empire
Year of release: 2021
Tracks:
A1 I Hate The Rich
A2 You're Not Blank
A3 Class War
A4 Mr. Big
A5 Sound Of The Rain
A6 It's Not Worth It
A7 Red Rockers
A8 Blow Up
A9 Folk Say Go
B1 Citizen
B2 National Guard
B3 New Kicks
B4 Before The Law
B5 C-A-R
B6 Some Things Never Change
B7 You Don't Matter Anymore