The Excitements - Sometimes Too Much Ain't Enough LP 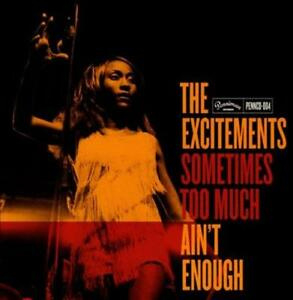 Description:
The Excitements are a hardworking band, almost hyperactive, so when you are in a state of perpetual motion, things happen fast and time flies. Within six months of their first show in March 2010, the group was touring all over Europe, and recorded their first long player. The album was a totally unexpected success which led the band across the continent for a year and a half. It's sad to say, but 'Sometimes Too Much Ain't Enough', the second LP, surpasses its predecessor in all respects, and gives the impression that until now the band was just... warming up.
The essence of their sound has not changed substantially over the debut: early soul, r&b, and a hint of '50s gospel, but now fully developed, sharpened and fine tuned, thanks to two years of intense rehearsing and countless shows. It would be difficult to pick out a standout song from this album, because it contains twelve potential singles. Just listen to it, and see that everything is here, great originals and covers arranged and performed with a nod to all that you love, and a repertoire that offers everything from sophisticated r&b, soul, gospel and Latin, to Stax-style instrumentals and tear jerking, hypnotic ballads.
Masterfully produced by Mike Mariconda, the band moves freely from a small combo to an orchestra with a sense of dynamics that few bands have today. The explosive voice of Koko Jean Davis demands that you jump, dance, and weep all at the same time, confirming that, indeed, there are times when too much simply ain't enough.
Format & package: LP
Record label: Penniman Records
Year of release: 2013
Tracks:
A1 Keep It To Yourself
A2 Ha, Ha, Ha
A3 That's What You Got
A4 Keep Your Hands Off
A5 I've Bet And I've Lost Again
A6 Don't You Dare To Tell Her
B1 The Hammer
B2 Fishing Pole
B3 Tell Me Where I Stand
B4 I Believe You
B5 I Found Myself A Man (I Found A Little Girl)
B6 Sometimes Too Much Ain't Not Enough