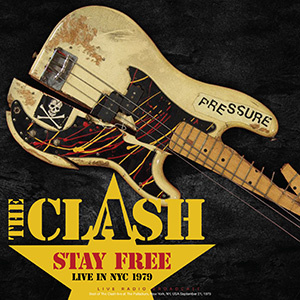 Description:
The Clash were an English rock band formed in London in 1976 and true pioneers of British punk rock. Compared to The Sex Pistols, the punk of The Clash was more musically adventurous, expanding its hard rock & roll with reggae, dub, and rockabilly among other roots music. After only 10 years, the band called it quits in 1986, but their legacy lives on till this day. Recording while touring the United Stated, this record features the hit song ‘London Calling’ and many more musical highlights.
Format & package: LP
Record label: Cult Legends
Year of release: 2022
Tracks:
A1 Safe European Home
A2 I’m So Bored With The USA
A3 Complete Control
A4 London Calling
A5 (White Man) In Hammersmith Palais
A6 I Fought The Law
A7 Jail Guitar Doors
A8 Clash City Rockers
B1 Stay Free
B2 The Guns Of Brixton
B3 English Civil War
B4 Clampdown
B5 Tommy Gun
B6 Garageland
B7 ArmagideonTime
B8 White Riot