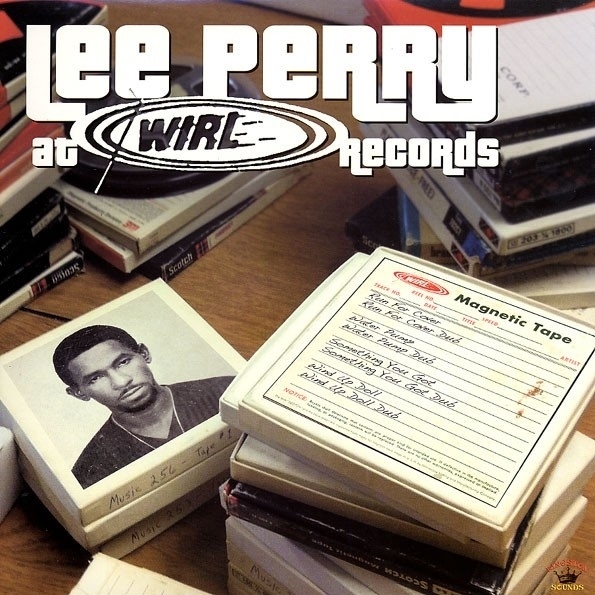 Lee Perry’s time at WIRL Records, later to be renamed Dynamic Sounds Studios, was a very productive time in his career. A run of great singles and the shaping of a new sound, the beginning of what we know today as Reggae.
Lee Perry (b. Rainford Hugh Perry, 28 March 1936, Hanover,Jamaica) began his entry into the music business at the age of 16.Moving up to Kingston Town and working around various Sound Systems, before finding employment at Coxonne Dodd’s Studio One set up, in the late 50’s early 1960’s. Perry started out as a record scout, organising sessions and supervising auditions at Dodd’s record shop on Orange Street. Helping to make hits for Delroy Wilson ( ‘Joe Liges’, ‘Spit In The Sky’) and the Maytals, which would lead to his own vocal records released through Studio One. The musical backing for which, came from legendary Studio One house band The Skatalites. Another important relationship for Perry, his first recordings with Bob Marley came in the form of the Wailers, also providing backing, alongside the Soulettes who featured Rita Marley. Cutting such tunes as ‘Chicken Scratch’ around 1965/1966. This tune was also to provide him with one of his future nicknames ‘Scratch’.
A dispute over credits and money saw Perry leave Studio One and work with various producers including Clancy Eccles and J. J. Johnson, before arriving at the door of producer Joe Gibbs in 1967. Here he would write songs and produce hits for artists such as, Errol Dunkley and the Pioneers. A tune cut during his time with Gibbs, voiced a snipe at fellow employee Dodd, a trademark that would become an outlet for his frustrations in the business. This particular tune ‘The Upsetter’ would also provide another moniker and a name for his label ‘Upsetter’. Again lack of musical credit
and financial reward saw Perry move on this time to WIRL (West Indies Records Limited) Records, working alongside manager Clifford Rae, who would provide studio time and pay for pressings in return for helping to promote and distribute WIRL product, which Perry would carry out on his trusted Honda 50 motorcycle around Kingston town.
This period at WIRL saw some inspired work from Perry. ‘Run For Cover’ was another musical blow to a previous employer, Coxonne Dodd and featured the Sensations on backing vocals and Lynn Taitt’s guitar picking skills. ‘People Funny Boy’ was a massive hit for Perry going on to sell over 60,000 copies. Joe Gibbs would be at the end of this musical attack. Perry had felt Joe Gibbs had turned his back on him, after he had provided hits for groups like, The Pioneers amongst others. The song would be one of the first records to feature a New Beat (Reggae) inspired by the sounds coming out of a Pocomania Church, Perry had heard one night. The congregation inside, wailed in a more slower way than the current musical style of the time Ska!. Perry worked up this new style with Clancy Eccles, who would come under attack himself in ‘You Crummy’. Their closeness, which as detailed in that song would find them, ‘Even shared the same Gal’ but ‘Now it’s plain to see we reached the end’. ‘Set Them Free’ was an answer record to Prince Buster’s ‘Judge Dread’ (which had featured Perry on it) a plea to the Judges in Jamaica that handed out extremely arsh sentences to the young offenders of the time. The track was cut on the same rhythm as ‘Run For Cover’ . ‘Django Shoots First’ inspired by the Spaghetti Western film of the same name, features Sir Lord Comic. One of the early DJ’s who used a jive talking style over rhythms. ‘Night Doctor’ was a hit instrumental that featured the organ talents of Ansel Collins, that really push the tune along. ‘Something You Got’ was a cover of an USA R& B track by Chris Kenner and ‘Wind Up Girl’ was cut at the same session. ‘Water Pump’ was a rude style track that was cut later and originally released in 1974. As was ‘People Sokup Boy’ a later version of ‘People Funny Boy’. ‘Labrish’ which means idol talk and gossip, was one of the first great talk over tunes that features Lee Perry and producer Bunny ‘Striker’ Lee talking about the Political situation in Jamaica at the time and their own financial situation and stories of various comrades. The track was originally released in 1973.
Format & package: LP
Record label: Kingston Sounds
Year of release: 2019 (compilation)
Tracks:
A1 Labrish
A2 Run For Cover
A3 You Crummy
A4 People Funny Boy
A5 Justice To The People
A6 Django Shoots First
A7 Night Doctor
B1 People Sokup Boy
B2 Set Them Free
B3 Clint Eastwood Rides Again
B4 Water Pump
B5 Something You Got
B6 Wind Up Doll
B7 Iron Claw