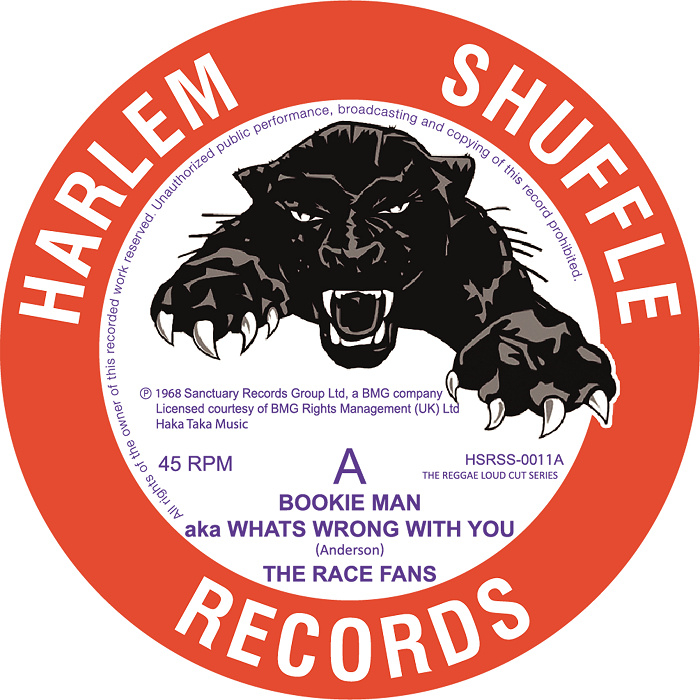 Description:
Following our last release by the Bleechers, we are proud to announce the release of 'What's Wrong With You' / 'Bookie Man' by the Race Fans. We are also glad to shed some light on yet another Reggay mystery! The Bleechers got a couple of tracks they did not record but got credited for. The brilliant 'What’s Wrong With You', their very first track on an Upsetter blank in 1968, is actually not performed by them... but by the Race Fans!
The Race Fans recorded two songs: 'Time Marches On' and a great song called 'Bookie Man' for the Upset label in Jamaica and on Trojan in UK in 1968. Unknown to many, they recorded a third track: the stunning 'What’s Wrong With You'. To add confusion, it was also named 'Bookie Man' but was completely different from the aforementioned track. Somehow this 'Bookie Man - What’s Wrong With You' track was released as a B side for The Upsetters' 'Man From MI5' single and credited to The Bleechers. This is therefore the first official release of this song under the correct title and the correct artist credit.
Very little is known about The Race Fans except that the well-known Jamaican singer David Isaacs was in it. In the late 60s and early 70s Isaacs recorded for Lee 'Scratch' Perry and Trojan before joining the Itals with whom he performed for over 20 years. Beside the three songs with The Race Fans, Isaacs also recorded about 50 singles and 6 albums under his own name throughout his long career.
Although officially produced by Lee Scratch Perry, both songs are credited to “Anderson”, probably Lynford Anderson aka Andy Capp, a gifted sound engineer, producer and vocalist who founded the Upset label with Lee Scratch Perry in 1967.
This killer double sider is the first release of the stunning 'Bookie Man - What’s Wrong With You'. It was previously released as a blank label only in 1968 and was wrongly credited to The Bleechers. On the B side, 'Bookie Man' is a completely different track and it is a rare and brilliant song in its own right.  It is also the first time the two 'Bookie Man' songs are featured together on a 7inch.
Format & package: 7"
Record label: Harlem Shuffle
Year of release: 2022
Tracks:
A What's Wrong With You
B Bookie Man