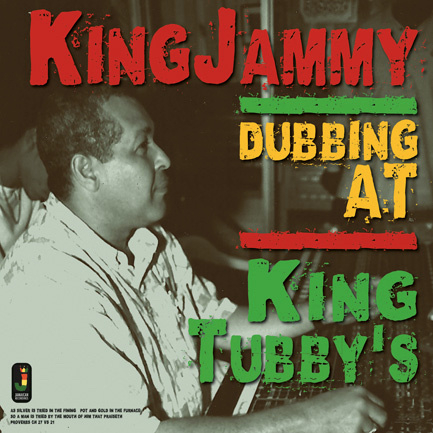 Prince Jammy became a King while cutting his musical teeth working for the dub master himself King Tubby. In that age old Jamaican way where it seems everyone in Jamaica was given a new name to work with, Prince Jammy as he would be called so impressed his colleges that he rose from a Prince to a King both names given to him by producer Bunny ‘Striker’ Lee.
King Jammy (b. Lloyd James, 1947, Montego Bay, Jamaica) then named Prince Jammy took up the vacant spot as engineer at King Tubby’s request around 1975, after what turned out to be 5 year hiatus in Canada. Jammy had worked with Tubby for many years previous to this and had built a great working relationship, but Jammy had taken some work opportunity that would see him actually staying in Canada for 5 years. It was the Tubby’s offer of fulltime work and missing Jamaica and family that would lead to his return.
This would enable Tubby to continue his electrical business knowing full well that Jammy could be trusted to run the studio sessions smoothly. Jammy was always the first to arrive and the last to leave the hundreds of sessions he oversaw at Tubby’s studio, honing his skills that again with Tubby’s blessing and guidance would lead to building his own studio not a stones throw from Tubby’s in the Waterhouse district of Kingston.
Out of the many proteges that trained and worked at King Tubby’s and there were many, Scientist, singer Pat Kelly, Prince Phillip Smart to name but a few it was King Jammy’s work that was the main stay. We have selected a set of tunes that were rebuilt with King Jammy at the controls.
Format & package: LP
Record label: Kingston Sounds
Year of release: 2016 (compilation)
Tracks:
A1 Folly Dub
A2 Jah Jah Dub Dub
A3 Dread Dub
A4 No Turn Back Dub
A5 Family Dub
A6 Every Tongue Dub
B1 I'm Still In Dub
B2 Empty Dub
B3 And The Lord Said Dub
B4 Tonight Dub
B5 Cinderella Dub
B6 Steppers Out Of Babylon Dub