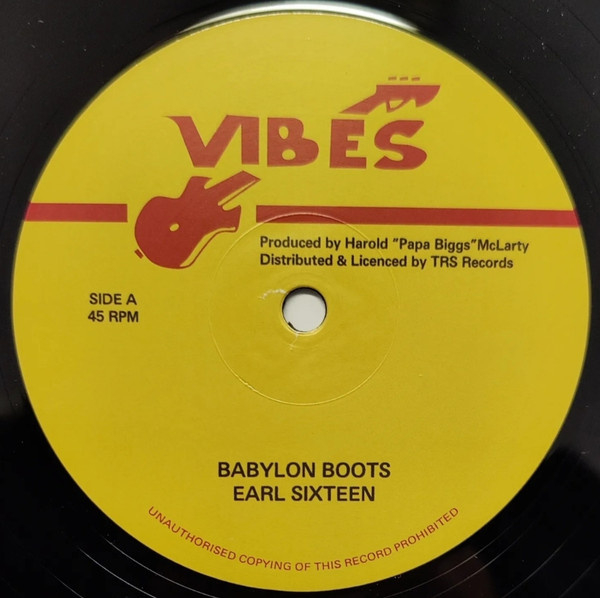 Description:
Earl Sixteen (Earl Daley) is a force of Reggae music and a living legend still heavily active and in demand globally. Born in Kingston, Jamaica he's been recording for nearly five decades, and according to one interview he explains " I started working, touring and doing my first recordings at the age of 16. The guys in the band said, “Bwoy, you act like a big man! But you’re only 16 so we’re going to call you Earl Sixteen so you remember to act like a bwoy!” and so the name stuck.
TRS Records is thrilled to announce the long overdue reissue of 'Babylon Boots' which was voiced in 1986 on Harold McLarty aka Papa Biggs' Vibes imprint from the Washington DC area. It was in fact one of the earliest releases on the label before the Vibes label took a different approach and became synonymous with 90's Dancehall releasing countless artists such as Sanchez, Major Mackerel, Tiger, Foxy Brown just to name a few. Papa Biggs is still one of heavyweights out of the DC area who's still active and involved in touring and management.
We are currently working with Papa Biggs sifting through 35 year old tapes and excavating years of unreleased recordings and alternate dub versions that will hopefully surface in the not too distant future. To "kick" things off, there's no other fitting tune like Babylon Boots!
Format & package: 12"
Record label: Vibes / TRS
Year of release: 2023 (reissued from 1986)
Tracks:
A Babylon Boots
B Babylon Boots (Version)