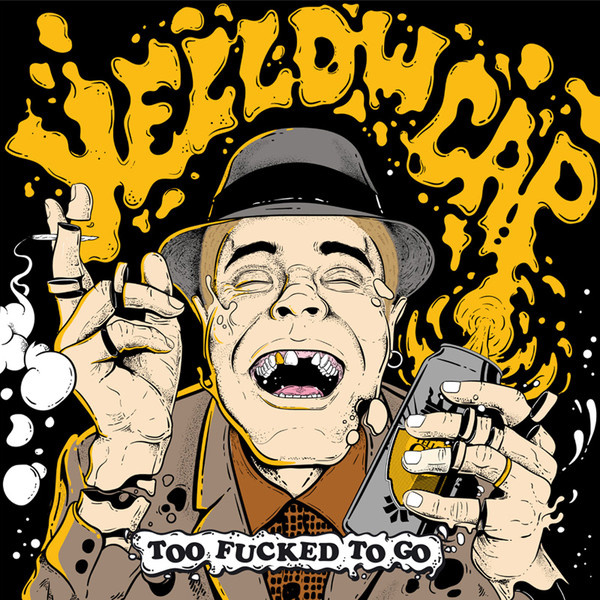 Description:
Just in time for their 20th anniversary YELLOW CAP give their fans a fulminant jubilee album: TOO FUCKED TO GO. The title track of the album, which has already been released as a single in April, proves that even at the age of 20 you do not have to be mature or reasonable. A small pub packed with people in high spirits, the music way too loud and nobody is thinking about - or even capable of - going home: you're just too fucked to go!
Founded back in 1998, the band not only pioneered ska in their hometown of Görlitz / Germany, but also spread their specific sound, which primarily ranges from British and 3rd wave ska to Jamaican influences, so far on five albums, various singles and countless gigs far beyond their home country and even to regular tours in Brazil.
The new album comes with 14 songs, recorded in the band's own LBUM Studio and in Berlin's Tonbrauerei. It presents a return to the origins of European ska in England, without missing the playfulness and openness also inherent in other styles of music. The sound has become rougher, more genuine - you can tell that many of the instruments were recorded live and together.
In terms of the lyrics the band makes a clear statement on cosmopolitanism in their refugee hymn "Safe & Sound", but also sing about love, boxing matches and, of course, parties. Already in the very first song "Better Man" hell is let loose and it makes you want to hear more. You'll find catchy tunes like "Too Fucked To Go" and "Rain Is Falling" next to other powerful uptempo tracks, some poppy or tradska-like songs or the wonderful reggae instrumental of the famous crime comedy "Thème de Fantomas" - even the excited Louis de Funes would chill out on this one.
The record cover was designed by the extraordinary Brazilian artist "Shiron the Iron", a friend of the band's, who also contrived the last single cover and spent time with the band during the 2018 tour of Brazil.
All in all, an outstanding and versatile anniversary album, available in a strictly limited LP edition in a luxury foldable sleeve including a free mp3 download code.
Format & package: LP in gatefold cover
Record label: Pork Pie
Year of release: 2018
Tracks:
A1 Betterman
A2 Beachboys Dream
A3 Rookie
A4 Too Fucked To Go
A5 You Need To Know
A6 Behind The Stars
B1 One More Night In Rio
B2 God Knows
B3 Aint Enough Flowers
B4 Rain Is Falling
B5 Bittersweet Candy
Digital bonus:
Safe And Sound
Theme De Fantomas